The differences between European and Latin American Spanish came about simply due to distance and time. As the Spanish began to set out and colonize the west, cultures collided and certain expressions, words, and phrases began to mix with other linguistic influences. Over time, this evolved to create permanent changes in the way the language is expressed, both in speech and in writing, creating distinct Spanish variations.

END_OF_DOCUMENT_TOKEN_TO_BE_REPLACED

Because Spanish is spoken so widely across the world, there are actually several standardized Spanish variants. Some of the most common include Latin American Spanish, US Spanish, and European Spanish.

Neutral Spanish (as used by Microsoft) can be compared to ‘universal’ Spanish, in that it is designed to be understood by all Spanish speakers worldwide. The term doesn’t refer to any one specific dialect, but instead refers to the process of finding terms or expressions that would be best suited to a multinational audience. This means it lacks all the regionalisms, colloquialisms, and grammatical quirks that characterize a dialect and connect it to a specific culture or nation. The idea behind this neutral Spanish is commercial and not linguistic: as Microsoft products are marketed globally, it is cheaper to produce only one version of the product in Spanish.

END_OF_DOCUMENT_TOKEN_TO_BE_REPLACED

The most striking differences when comparing Latin American vs European Spanish come down to accent and pronunciation, but vocabulary and even grammar can be very different between the two. Here is our top ten list of the main differences.

END_OF_DOCUMENT_TOKEN_TO_BE_REPLACED

How to Reach a Broader Audience with “Universal” Spanish

Spanish is one of the most widely spoken languages in the world. The native language of around 470 million people and spoken in more than two dozen countries, Spanish is only second behind Mandarin in total number of native speakers.1 Spanish speakers represent a very large, and very geographically diverse group of consumers, and one of the biggest challenges in reaching these potential customers is finding a way to effectively communicate with the largest possible audience. Because each country and region has its own Spanish dialect, many terms aren’t likely to sound natural across different groups of speakers. Of course, there are general terms that are understandable and acceptable throughout the Spanish-speaking world and are considered “Universal” or “Neutral” Spanish. Communication in “Universal” Spanish addresses the vocabulary discrepancies which would be found in Spain (Castilian) and the Americas.

END_OF_DOCUMENT_TOKEN_TO_BE_REPLACED

One size does NOT fit all when translating for Spanish market

More than 16 percent of the United States population is of Hispanic origin, according to the 2010 U.S. Census. The number of people who identify as Hispanic went up from 35.3 to 50.5 million since the last census in the year 2000.

Many companies have capitalized on this already by addressing this growing segment of the population, and evidence suggests that more companies are looking to direct marketing campaigns toward US-based Hispanic audiences.

END_OF_DOCUMENT_TOKEN_TO_BE_REPLACED

Responding to an emergency can be tough when you can't understand the person who's injured or in peril.

END_OF_DOCUMENT_TOKEN_TO_BE_REPLACED 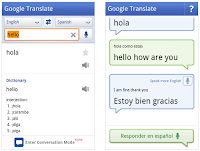 New to Android phones is the Conversation Mode feature, where users can speak with their foreign-speaking friends in real time. Conversation Mode uses Google’s machine translation technology to convert the spoken word from English into Spanish, and vice versa.

END_OF_DOCUMENT_TOKEN_TO_BE_REPLACED

A New Way to ‘Unify’ the Spanish Language

Can we all speak the same no matter what region we’re in?

END_OF_DOCUMENT_TOKEN_TO_BE_REPLACED

The Hispanic population has grown significantly within the last couple of years and so has the need for Spanish translation. However, meeting the needs for language translation in Spanish is a trickier process than one may think. According to an article put out by Chief Marketer, Chanin Ballance points out that “[s]poken in some 23 countries by more than 450 million people, the language we know as ‘Spanish’ is in truth really more a family of closely related languages. […] If you have visited Madrid and Mexico City you know this firsthand. The idioms, slang, pronunciation and even grammar in one differ noticeably from those in the other.”