Posted by Dynamic Language on February 06, 2017

Social media has transformed globalization, bringing people together from around the world to share experiences and information — and it isn’t just individuals making connections. Innovative businesses are using social media marketing to promote products to an international audience with great success. Many find that Facebook is the clear leader in advanced solutions for companies of all sizes.

From audience insights to performance metrics, Facebook’s tools have made it possible for organizations to connect with consumers on every continent. As of September 30, 2016, the site had 1.79 billion active users — 84.9 percent of whom are outside the United States and Canada. When creating Facebook ads, targeted parameters for audience segmentation is critical.  These parameters then allow you to localize your facebook ad copy and images that will resonate with the target audience of specific loocale. It is important to understand that ad copy that targets millennials in Seattle, WA, when translated, may not resonate when shown to millennials in the UK.

Cultural Consulting: Much More Than a Quick Translation

A quick translation might be technically correct — but that doesn’t mean your intended message is being delivered. Green Giant discovered how important nuances are during a marketing campaign aimed at Arabic-speaking countries. Instead of introducing the Jolly Green Giant, who cheerfully promotes the benefits of adding vegetables to meal planning, Green Giant’s ads took a nightmarish turn. Word-for-word translation turned “Jolly Green Giant” into “Intimidating Green Monster.”

Translation issues aren’t the only obstacle that companies face when taking the business to an international market. For example, Walmart discovered that its focus on delivering the lowest prices did not resonate with a Japanese audience. Japanese shoppers traditionally associate low price with low quality, requiring Walmart to recalibrate its message before trying to connect with the Japanese market.

By localizing or transcreating Facebook ads that take local customers and language quirks into consideration, businesses reach their target international audience in a way that truly connects with prospective consumers.

Beyond Language: How Images and Colors Impact International Audiences

Facebook ads are focused on images, because content with relevant visuals typically earns 94 percent more views than text-only versions, and Facebook users are 40 times more likely to share content when an image is involved. Of course, these figures only hold true when images resonate with the intended audience, which makes deep understanding of local cultural norms and values critical for a successful ad campaign.

For example, choosing images for a Facebook ad campaign targeting Chinese consumers requires familiarity with thousands of years of history and tradition. Many companies who wish to be successful in China use images depicting the animals considered to be powerful in Chinese culture, including dragons, unicorns and cranes.

Color can have a surprising impact on sales, and matching cultural color associations with a Facebook marketing campaign can mean the difference between success and failure. Packaging professionals still talk about the color-related blunder made by Pepsi in the 1950s. At the time, Pepsi was enjoying significant market share in Southeast Asia, and leaders decided to freshen the company’s look. Vending machines were redesigned with a light blue color scheme, replacing the traditional royal blue, and sales plummeted. Pepsi marketers failed to consider that light blue is associated with death in Southeast Asia, and despite a rapid return to royal blue, it was quite some time before Pepsi regained its earlier strength in the area.

It simply isn’t practical for most organizations to invest the time and resources required to gain a true understanding of local customs for every new market. Cultural consultants simplify this process, as they come to the table fully prepared to provide advice, along with transcreation services. 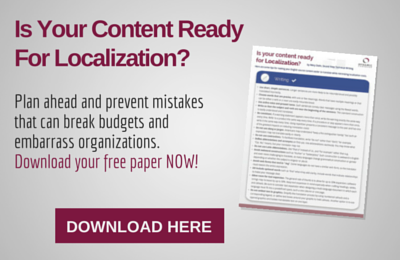