Electronic Translation in the Classroom

Electronic translation software has found its way into one British elementary school hoping to connect to its multilingual student body. Manor Park Primary is catering to students (totaling 30 languages) still adapting to the English language, the UK’s Daily Mail reports.

The software is called the “Talking Tutor” and translates 25 languages verbally and 200 more languages on the children’s computer screens. The school says the software’s 95% accuracy claim has helped teachers and students communicate much better. This electronic translation in the classroom offers avatars to resemble multiple ethnicities.

Although a smooth transition into the English school system is desirable, it is important to limit this type of technology in the long run. English instruction and English acquisition is vital to the success of students in the UK (and other English-speaking countries), so this new translation software should be used in moderation.

An example of poor English instruction is in California, where 60% of English-learners weren’t proficient after six years of instruction. As a result, California schools have seen a decline in their high school graduation rate.

There are critics of Manor Park’s new system, but the steps the school is taking to improve the education of its students is honorable. Especially if it means faster and better English acquisition! 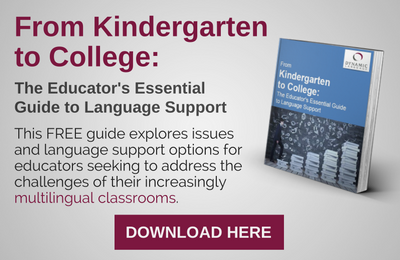